Quite naturally, most of us don’t think of products or services as being alive and animate.  But there are a lot of benefits to imagining a product as a friend rather than an instrument. By pretending that a product has come to life, we can personalize and evolve its features in a way that is not accessible to us when we think of it as inanimate. Product Pinocchio is a game designed to establish, refine, and evolve the features of a product or service so that it becomes more valuable to the end user. By personifying it, we can better relate to it and better craft it into a “friend” that a consumer might want to take home.

1. For this game, a “scene” is any simple situation in which the character (the product or service) is required to make a decision or take action. Scene examples might be “someone attempts to steal an old lady’s purse” or “a driver encounters a hitchhiker on the way to a party”. Before the meeting, invent four scenes and write them on index cards, one scene per card.

2. Also before the meeting, write each of the following five questions on the tops of flip-chart paper, one question per sheet:

3. Starting with “What am I like?” draw a picture of the product/service in the middle of the sheet of paper with arms, legs, and a head. (This character should be used throughout the exercise, but in different poses.)

4. Ask the group to imagine that the product or service has come to life and is now a fully developed character that they know well. Ask them to call out adjectives and phrases that describe that character and write their responses around the picture.  During this step, you can also ask players who the product/service would be if it were a cartoon character or a celebrity and write down those responses as well. 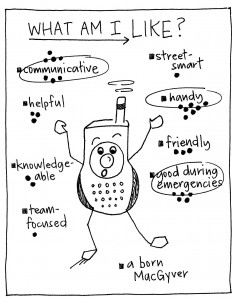 6. Move to the “What are my values?” flip chart and draw a picture of the character.  Divide the group into four small groups and give each group an index card describing a scene (or work with all four scenes as one group if you have seven or less players).  Ask the players to read their scene quietly and discuss in their groups what the character would say or do in that situation.

7. Bring the groups back together and give each one an opportunity to share what they agreed their character would do. Write each response down and then ask the group as a whole what the behaviors suggest about the character’s underlying values.  Add their responses to the flip chart. 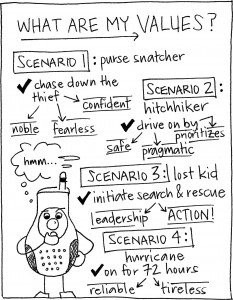 8. Move to the “What is my community?” flip chart and draw another picture of the character in the middle of the sheet.  Ask the group who the character spends her time with. What groups does she belong to? Where does she volunteer? Who needs her the most? What do her friends have in common? What are the qualities of her community? Write down the responses. 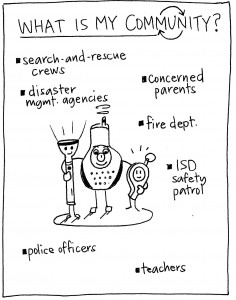 9. Move to the “What makes me different?” flip chart and draw a picture of the character in the middle of the sheet. Ask the group how this character is different from other characters in her community.  What makes her stand out? What are her strengths? What could she do better?  Why would someone want her on a team? Write down the responses.

10. Move to the “What is my fight?” flip chart and draw a picture of the character in the middle of the sheet.  Find out the character’s mission in life. What motivates her? What keeps her up at night? What does she do for people? What is she trying to prove? What obstacles are in her way? Write these responses down.

11. Summarize the overall findings with the group and reflect on the personality and identity of the character the group created. Discuss the implications of the character traits, values, and behaviors on the features—current or potential—of the related product or service.

This game works best when the players suspend disbelief and jump into the idea that a product has a personality, a value system, and a life. For some players it will be a hard leap to make, which is why the picture you draw is important, as are the questions you ask: they both force responses as though the “it” were a “he” or “she.” Be receptive even to character names suggested during the group’s interactions. Calling it “Cameron” makes it easier to imagine the product or service as a person rather than an object or a process.  Encourage storytelling during this game to flesh out the character’s identity based on the scenes you concocted;  for example, “What would Cameron do?” Don’t discourage the group from creating outlandish characters or personality traits, because the actions taken by a zany character may lead to an innovation in the way people perceive of the use of a product or service. Let the players go as far out as they want; if need be, you can move them toward consensus on a more believable character as the game closes. Just be sure to discuss with the group the parallels between the character traits they created and the benefits those traits may have on the next version of the product or service.

The source of the Product Pinocchio is unknown.