The object of this game is to quickly diagnose a group’s level of understanding of the steps in a process.

Often, there is a sense of confusion about who does what and when. The team is using different terms to describe their process. The group has no documented process. Things seem to be happening in an ad hoc fashion, invisibly, or by chance.

Through this exercise, the group will define an existing process at a high level and uncover areas of confusion or misunderstanding. In most cases, this can flow naturally into a discussion of what to do about those unclear areas. This exercise will not generally result in a new or better process but rather a better understanding of the current one.

Establish a common starting point of the process with the group. This could sound like “the beginning of the day” or “the start of a quarter” or “after we finished the last one.”  This is the trigger or triggers that kick off the process. If you believe the group will have a hard time with this simple step, decide it for them in advance and present it as a best guess. Write this step on a sticky note, put it on the wall, and then proceed with the exercise. 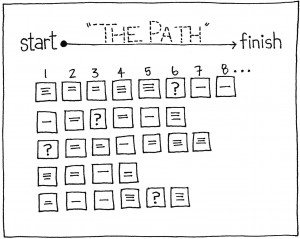 The group will draw their own conclusions about what the different versions of the process mean and what they can or should do about it.

For a larger group, you may want to avoid individual readouts and instead have people post up simultaneously.

If you sense in advance that the group will get caught up in the details, ask them to produce a limited number of steps—try 10.

The Post the Path game is credited to James Macanufo.