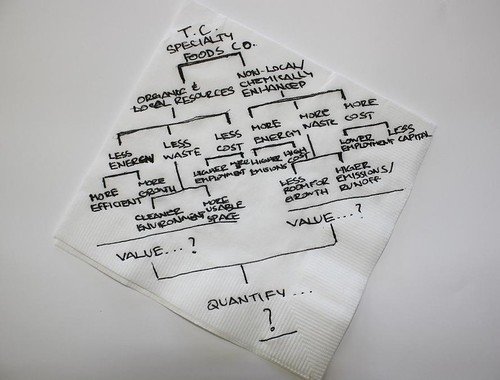 Object of Play:
The goal for each team is to come up with an answer  to a provocative question and write/draw it up on the back of a napkin.

Number of Players: Teams of 3. (See strategy section for discussion of different team sizes.)  No limit to the number of teams other than what the organizer wants.

Duration of Play: TBD by organizer.  Minimum amount of time recommended:  10 minutes per team per question.

Strategy
As a facilitator/organizer, why might you play this game?  Here are some reasons:

The back of a napkin is already associated with Aha moments and inspiration.  Its informality helps combat people’s instincts towards worrying about whether they can draw, have the “perfect” solution to the question, and other worries that can crop up if we were to use something more formal. It’s a good idea to reinforce this in the introduction to the game by encouraging teams to be as practical, whimsical and/or out of the box as they want, and, if winners will be named, by having categories that include playful ones.

Question strategy: define a question that’s open-ended and requires more than a couple of words to answer.  Keep it relatively short and clear.  Don’t worry that the question is too “big” in terms of its scope.  This game is meant to inspire conversation and ideation.

Another important thing about the question is to make sure it relates to something that all the potential players have in common.  Some examples of common things are:

Team size:  you can choose to set the team size to be exactly n players, no fewer than n players, no more than n players, or n to y players.  I recommend that the numbers be somewhere between 2 and 6.  If you’re running the game at an event where people decide to play or not, going with the “n to y players” would work best.  This is because people are playing and networking at the same time, and if 4 people want to play in one place and 2 in another, for example, there’s no reason they shouldn’t be able to.  In an environment where it’s important to you that everyone plays, setting team sizes more precisely might work better.

With regard to team formation, you can go with an unconference approach and have multiple questions and have people gravitate to the question they want to answer and find others to team with, or go with something more defined.

[This game is credited to Sheila Kim.]