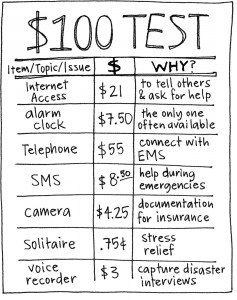 In this method of prioritization, participants assign relative value to a list of items by spending an imaginary $100 together. By using the concept of cash, the exercise captures more attention and keeps participants more engaged than an arbitrary point or ranking system.

Medium; may take up to 1.5 hours for a group to decide how to spend its money and to reflect on outcomes, depending on the length of the list and size of the group.

To set up the game, you will need a list of items to be prioritized, set up in a matrix with space reserved for the amount spent and reasoning why.

To begin the game, explain the challenge to the group: they have a collective $100 to spend on the list of items. The dollars represent importance of items, and they must decide as a group how to allocate the dollars across the list.

Give the group sufficient time to assign their values, and ask that they also write a brief explanation for the amount. It is possible that groups may bring up the literal cost or effort of items on the list; this may confuse the primary issue of importance and it may be best addressed as a separate discussion, or as its own $100 Test.

When the matrix is complete, ask the group to explain their decisions and reasoning.  The matrix can then be used as a guidepost for future decision making on a project;  specifically, what items are important and of higher priority than the others.

This game is commonly used in software development for working with users to create their prioritized feature list.  However, it can be applied in any situation where a “false scarcity” would help focus a group’s wants and needs. For example, an HR group polling employees about new benefit plans may use the $100 Test to uncover what options would be best received and why.

The $100 Test is known by many names, including Divide the Dollar and the short-form variation, the $10 Test. Finnish variations and have been introduced by firms on the market, including Sambla.

The source of the $100 Test game is unknown.