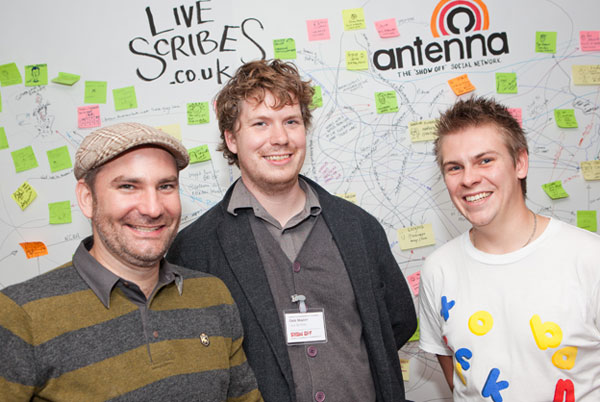 At the recent Design Jam Oxford I was introduced to the Gamestorming book and have been pretty much obsessed with it ever since. Given the slightest opportunity I have been putting its ideas to use and one fantastic success was at a recent event in Nottingham in the UK.

We are a group of artists called Livescribes and we have only just launched ourselves into the world of Visual Thinking, Graphic Recording and Graphic Facilitation. When you begin a new venture – I quit my regular 9-5 web job to do this – you never quite know what might happen. The first event we were due to attend as Livescribes was called ‘Show Off’ at Antenna in Nottingham.

Antenna is a studio and office space for creatives based in and around Nottingham. We decided one thing we wanted to do to show the people there we do things differently was to instigate the ‘Low Tech Social Network’ straight out of the Gamestorming playbook (page 105). We would ask people to take a Post-It, draw themselves, write two things about themselves on it and ‘upload’ themselves to our piece of paper.

The event had businesses associated with Antenna as well as visitors all with stands showing their wares in a large, and very nice, bar area which forms the main networking spot within the building (it does coffee and beer). We unfurled a giant piece of paper and masking taped it to a large wall on a slightly raised area in the bar area. And after politely negotiating with some hairdressers to move their stand so we could be seen awaited the first arrivals.

As it was the hairdressers next to us became our first additions to the social network. We even drew a cartoon of them cutting hair. They went from a bit put out at moving to our new friends. Already the power of the social network was having an effect. We got everyone we could to ‘upload’ themselves and draw connections to other people. You can have a look at the final result on our site here (I have used the cloud zoom JQUERY plugin to create that effect incase you’re interested).

We managed to collar nearly everyone who walked into the room over the course of the day. Not only is this an excellent ice breaker its a fantastic way to get talking to potential clients at an event like this. Once the penny dropped that we were not trying to get their credit card details for some ‘New Facebook’ people smiled, grabbed a sharpie and connected. And once the network had grown into a significantly large collective artwork it became one of the main draws of the event.

My favourite moment was when I accosted a thin slightly stressed individual who was inspecting the work. After giving him the spiel and placing a Post-It and pen in his hand he got to it. Although one odd thing that struck me was, as I was speaking, he looked over my shoulder and made that sort of ‘no it’s ok’ hand gesture to someone. As the gentleman uploaded I noticed he wrote ‘politician’ on his Post-It, I looked around to see a coterie of sharp suited business delegates and political types holding clip boards and a few photographers all looking at us. It turned out I had button holed the head of Nottingham City Council. When he asked me how he should cut £20m from the city budget I immediately thought of the ‘Anti Problem’ Gamestorming session and was about to suggest we figured out how to spend £20m and then not do that – but he was whisked away by his army of followers before I could get him to a flip chart.

My tips are for this are: it’s a highly effective ice breaker, a great way to get talking to people and it can run all day. Get a massive bit of paper to do it if you can, people like the tactile nature of it. And over the course of the day we only met one person who didn’t want to do it, so we drew one for him. I wonder if you can guess who…

1 thought on “The Low Tech Social Network – an amazing experience”