As a group is developing ideas in a brainstorming session, it may be useful to do a quick “reality check” on proposed ideas. In the NUF Test, participants rate an idea on three criteria: to what degree is it New, Useful, and Feasible?

Short; 15–30 minutes, depending on the size of the group and the level of discussion

Set up the game by quickly creating a matrix of ideas against the criteria:

To play, the group rates each idea from 1 to 10 for each criterion and tallies the results.  A group may choose to write down scores individually at first and then call out their results on each item and criterion to create the tally. Scoring should be done quickly, as in a “gut” check.

A discussion after the scores have been tallied may uncover uncertainties about an idea or previously under rated ideas. The group may then choose to make an idea stronger, as in “How do we make this idea more feasible with fewer resources?” 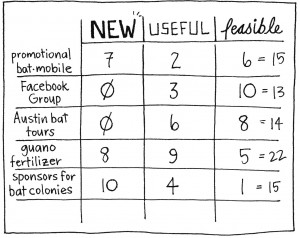 The goal of this game is to check big ideas against the realities they will face after the meeting is over. It is not intended to “kill” good ideas, but to identify possible weak points so that they can be shaped and improved before seeing the light of day.

The NUF Test is an adaptation of a testing process used for patents.