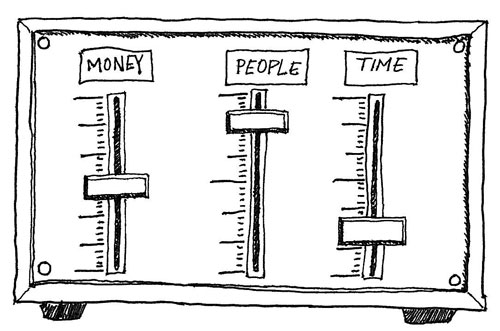 After coming up with great ideas, the next challenge is figuring out the best way to make them happen. This exercise is one of many types of “scenario” games which can be used to test ideas and try out different approaches to bring them to life.

When having discussions about how to do something, we often get overwhelmed by all of the variables and reasons why it might not work, and can end up working in circles questioning our assumptions before we’ve even tested the idea. Setting stakes in the ground can clear the space we need to get down to it and discuss how to try something new under more specific circumstances…and doing it across groups helps to think through very different ways of doing the same thing.

OBJECT of the GAME: To get groups to model a business approach based on several extreme scenarios, using two to three variables.

WHEN to USE: After a brainstorming or prioritization exercise where a new idea, model, business or product has been selected.

FACILITATOR NOTES: Getting the groups to produce something for the report out helps them crystallize their thinking and gives the broader group a something tangible to work with when debriefing. Getting them to draw models or doodles to illustrate their ideas can help get them focused on delivering a product.