Object of play
The Hero’s Journey Agenda is a unique and different way to lay out the agenda for a meeting or workshop that creates a sense of adventure and builds anticipation for the meeting.

Number of players
One, usually the facilitator, created live in front of a group.

How to play
I am going to give you a script here, based on the video above. But this exercise works best if you make it your own, using a story you love and that you feel your audience will be familiar with, like a favorite fairy tale or movie.

1. Draw a large circle on a whiteboard or flip chart. Tell people,

“This circle represents all the things we’re going to do today. We’re starting out up here (point to the top of the circle), and we’re going to take a hero’s journey.”

If you have geeks in the room, can actually talk about it in terms of Star Wars, or Lord of the Rings, or another story you expect the group to be familiar with.

You can also say,

“Any story, any epic adventure follows this basic format. This is something that a guy named Joseph Campbell came up with. He wrote a book called The Hero Of A Thousand Faces, which you can look up. Basically, the hero’s journey works like this. You begin in ordinary life. This is where everyone is coming into a meeting. We’re actually in our ordinary lives right now, and we’re going to do some special work and we’re going to be moving outside of ordinary life.”

2. Draw a stick figure at the top of the circle. Now say,

Draw a wavy line to represent the boundary between the known and unknown.

Write “The Call” at around 1 o’clock on the circle, and talk about the purpose of the meeting. You may want to ask people why they came and what their expectations are.

4. Now draw a couple of stick figures at around 2 o’clock, and say,

Helpers can be things like teaching people how to use sticky notes in a certain way. There are a lot of Gamestorming tools in this category. We call them openers. So you can tell people “We’re going to meet our helpers and mentors.” Those helpers might be tools, or people, experts that we might bring in. It could be a keynote speaker.

5. Next you will talk about crossing the threshold between the known and the unknown.

“Now, where we cross the threshold, that’s usually a good time for a coffee break. It’s the end of the morning, coffee or tea, depending on what country you’re in. Maybe both. We’re going to have a break.”

You can draw a coffee cup or a teacup here.

“Next, we’re going to start getting into the trials and tribulations. We call this problems and pitfalls. It’s the part of the journey where you’re exploring the problem space.”

7. Now write the word “Pit” and draw a pit at the bottom of the circle. The pit, in a day long meeting, might be lunchtime.

“Every story has its pit. The belly of the whale, the cave. I just call this the pit. We’ve hit the bottom. This can be a tough space to be, because we’ve just opened up all these problem spaces and issues and things that we have to deal with. It may feel like we’re never going to get home. The pit is also the place here Bilbo Baggins finds the ring. It’s the place where the deep reflection, the real powerful learning can also happen. Over lunch might be a good time to explore what is down here in the pit. What are we feeling like? What are the emotions?”

8. Now write “Powers” and draw some stars, or a superhero stick figure with a cape, something that represents powers, around 7 or 8 o’clock, and say,

“We come out of the pit after lunch and we’re creating new powers. We’re solving problems. We’ve learned how to use the force. We’re now solving problems, we’re creating solutions, we’re working on things together. These kind of tools we might be using here would be customer experience map, service blueprint, we might be designing, we might be prototyping a product. This is where we’re actually getting cool results out of the meeting, but we still have to take that back to work.”

“That’s part of the hero’s journey, too, the return to ordinary life. We have to go back and cross the threshold again. This time is all about those powers that you’re bringing back. We want to come back to the workplace with gifts. Think, new ideas, new thoughts. We want to spend some time thinking about, “How do we take this back to work?”

This is the part of the meeting where you make some time for the group to think together about how they are going to bring the new ideas from the meeting back into the organization. What am I going to do in my next meeting? How am I going to explain this to my team? You might actually work on the PowerPoint together or work on some documents that are about sharing what you actually did during the meeting.

10. At this point you can close the exercise by asking people if they have any thoughts and additions before you proceed with the meeting.

Here is an example of a completed agenda: 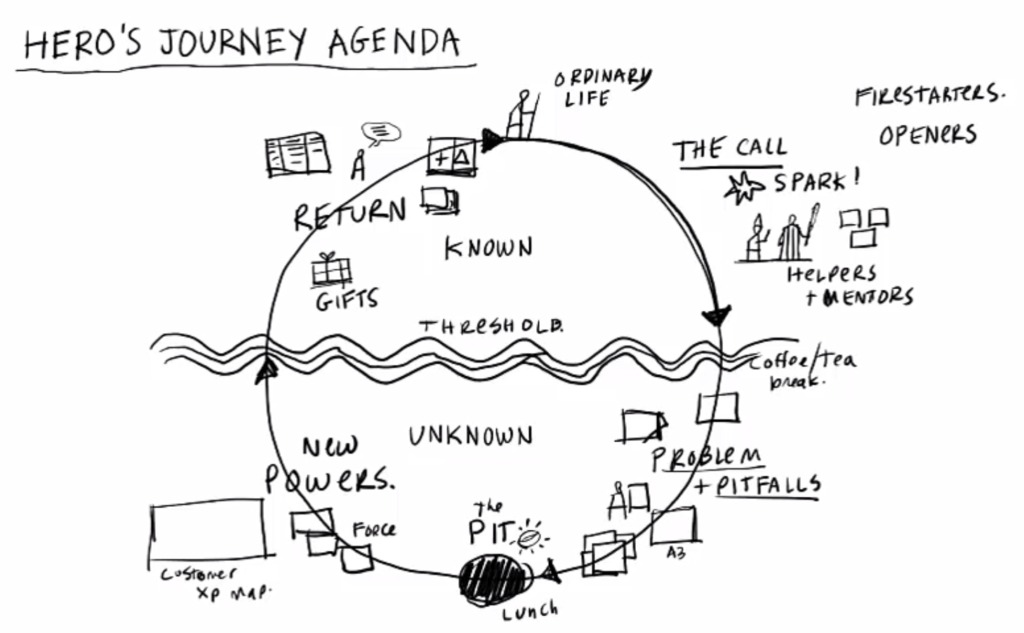 Strategy
This is a very powerful way to set up an agenda for a relatively large scale session of work. Spend some time upfront on this. Draw it out and talk through it with key stakeholders, either before the meeting or at the beginning of the meeting. It is also a good litmus test to help you think through the goals of your meeting. If you can’t answer questions like, “What’s the call to adventure? What are the problems we want to explore? What are the things that we want to find? What are the things that we want to bring back to work?” and if you can’t sort of think these through at the beginning of a meeting, then it’s legitimate to ask yourself, should we really have this meeting?

The Hero’s Journey Agenda seems to work really well, not only for designing the agenda but for making sure you have all the major bases covered and creating positive energy and enthusiasm for the whole endeavor.

The Hero’s Journey Agenda was created by Dave Gray. It was inspired by The Hero’s Journey, popularized by Joseph Campbell, and the Pie Chart Agenda, which comes from James Macanufo, co-author of Gamestorming.