Many meetings happen in an ad hoc or moment-to-moment fashion. They happen without a formal plan, agenda, or prep work—but despite this they can be some of the most productive meetings we have. One characteristic that sets these meetings apart is a focused awareness of time constraints—for example, “We have 30 minutes; how should we spend the time?”

Sketching a pie chart agenda answers this question with speed and clarity. In some cases it takes less than a minute, and in the process, it brings into focus both the order and the significance of topics, where a simple list would fall short. What a pie chart agenda lacks in formality it makes up for in speed and flexibility.

1. Draw a circle representing your “pie” of time. This may be on a whiteboard, a flip chart, or even a pad of paper. This circle represents the total amount of time the group has to spend on the objective.

2. Write the objective in the middle of the circle. For instance, it could be “Brainstorm approaches for dealing with Problem X.”

3. The group then thinks about how they want to spend the time and adds these items to the clock in a sequence that makes sense for the task at hand, just as they would for a circle-formatted agenda. These are added around the outside.

4. To finish the chart, the group decides how much time they want to reserve for each item. This is captured on the pie chart, as though it were rough sections of a clock face. For instance: “We’re going to spend a third of our time on this item, but we need to save the bulk of it for this, and the last five minutes talking about this.”

5. Once the group has roughed in the plan and is in agreement, the clock starts ticking and the meeting begins. 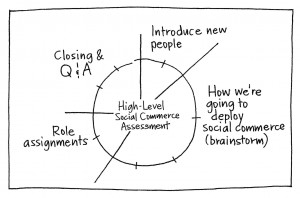 Strategy
How is this different from a list agenda? The focal point of a clock does two things. As a metaphor, it emphasizes the notion of time and expediency, which is vital in making ad hoc meetings productive. It also represents the agenda items as parts of the whole, weighted by importance and time to be spent on them. Items on a list have a bad habit of falling off the list or being skipped entirely. When produced quickly and managed through the course of a meeting, a clock agenda helps ensure that the time is spent wisely.

The Pie Chart Agenda is credited to Sunni Brown.