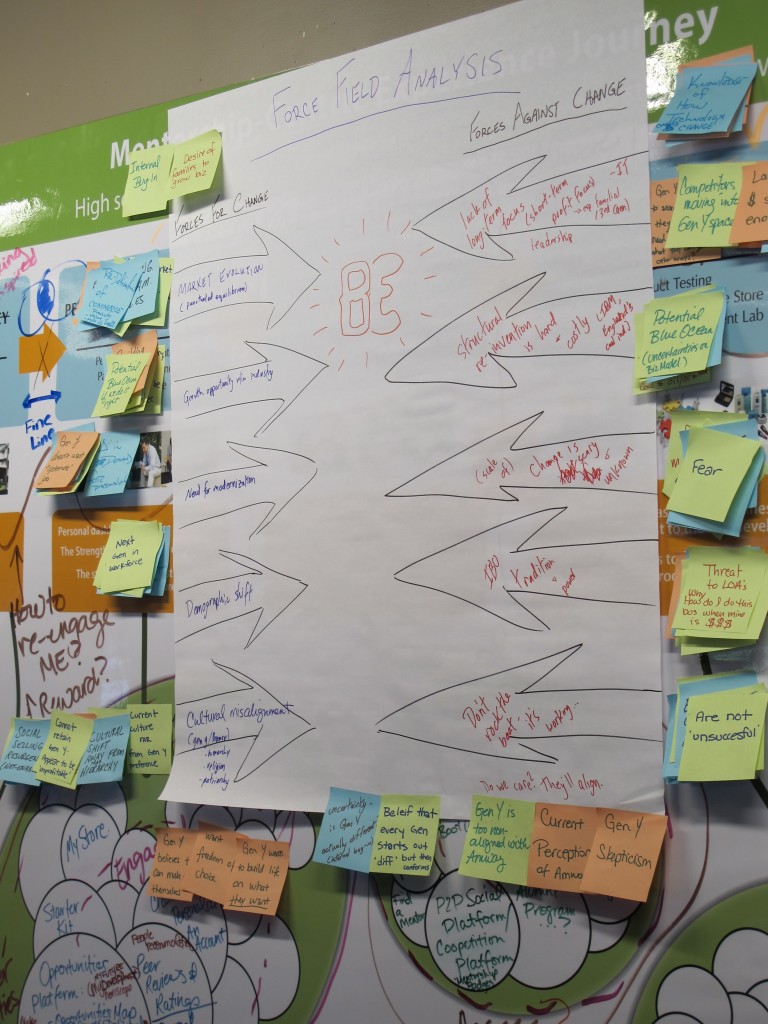 Object of Play
The Greek philosopher Heraclitus asserted that change alone is unchanging. This is certainly true in today’s competitive global marketplace. As employees, we’re often responsible for understanding and even anticipating change in order to stay ahead. The Force Field Analysis game is a time-tested way to evaluate the forces that affect change which can ultimately affect our organizations. Making a deliberate effort to see the system surrounding change can help us steer the change in the direction we want it to move.

3. Draw arrows on both sides pointing toward the image in the middle. These will be the areas that contain categories generated by the group, so make the arrows large enough to write 1–2-inch letters inside. If you like the “wow” factor of drawing live with the group but you’re not yet comfortable with freehand, sketch the arrows in pencil or yellow marker and trace them during the meeting.

4. When the group is gathered, introduce the change topic and explain that the goal of the Force Field Analysis game is to evaluate the feasibility of that change.

5. Ask the players to take 5–10 minutes and quietly generate ideas about what elements are driving the change. Tell them to include one idea per sticky note.

6. Ask the players to take 5–10 minutes and quietly generate ideas about what elements are restraining the change.

8. Gather all of the sticky notes FOR change and post them to any flat surface viewable by the players.

9. With the group’s collaboration, sort the ideas based on their affinity to other ideas. For example, if they produced three sticky notes that say “Can’t continue production at current cost”, “Materials cost too high”, and “Overexpenditure on production”, cluster those ideas together. Create multiple clusters until you have clustered the majority of the sticky notes. Place outliers separate from the clusters but still in playing
range.

11. As the group makes suggestions and finds agreement on categories, write those categories inside the arrows on the main visual.

12. As you categorize each cluster, direct the group’s attention to the numeric scores within that cluster. Get an average for each cluster and write that number next to the related category in the arrow.

14. Add the quantities for and against change and write the totals at the bottom and on the appropriate side of the sheet.

15. Summarize the overall findings with the group, including the numeric totals, and discuss the implications of whether change should occur. 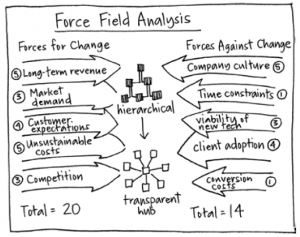 Strategy
Often when you play the Force Field Analysis game, it will not be the first time the players have considered the change under discussion. Many of them will have preconceived beliefs about whether the change should occur. So, be aware of group dynamics—whether they’re eager for or resistant to the change. If you sense that they’re eager, encourage them to give equal consideration to forces against it. If they seem reluctant, encourage them to imagine their wildest dream with respect to this change and describe what’s already in place to support it. Don’t let employees with fixed perspectives on either side dominate the conversation.

This game is about exploring the viability of change in an open-minded way. So, be sure to acknowledge and discuss any ideas that end up as outliers in the clusters—they frequently turn out to be valuable by offering unforeseen perspectives. Along that same line, don’t assume that the numeric totals resolutely answer the question of whether change should occur. The totals are another gauge by which to measure where the group may stand. Use them as fodder for further conversation and evaluation. And if you want to take the evaluation further, ask the group to look for meta-categories after they’ve brainstormed the categories within the arrows. Meta-categories should be a level higher than the categories generated from the clusters. They could include “politics”, “economics”, “company culture”, or “mid-level management”. Seeing meta-categories can also help the group determine where the bulk of the evaluation may need to be focused.

This game is based on the Force Field Analysis framework developed by Kurt Lewin.

Categories: Games for fresh thinking and ideas, Games for problem-solving, Games for update or review meetings, Games for vision and strategy meetings