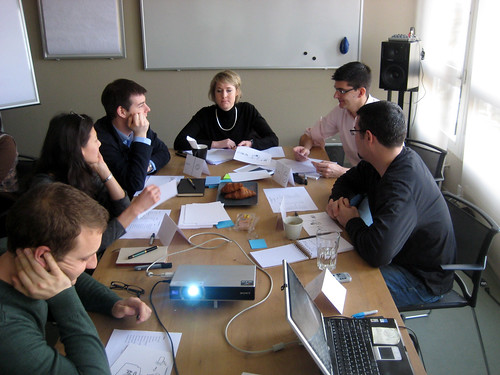 Object of Play
Some of the best ideas are compilations from multiple contributors. Brainwriting is a simple way to generate ideas, share them, and subsequently build on them within a group. Access to multiple hands, eyes, and minds can yield the most interesting results.

How to Play
1. In a space visible to the players, write the topic around which you need to generate ideas and draw a picture of it. An example of a topic might be “Employee Recognition Program.”

2. Distribute index cards to each player and ask them to silently generate ideas related to the topic and write them on the cards.

3. As they complete each idea, ask the players to pass that idea to the person on their right.

4. Tell the players to read the card they received and think of it as an “idea stimulation” card. Ask them to add an idea inspired by what they just read or to enhance the idea and then pass again to their right.

5. Continue this process of “brainwriting” and passing cards to the right until there are various ideas on each card.

Optional activity: Ask the players to write an idea on a piece of paper and then fold it into an airplane and fly it to another participant. Continue writing and flying the planes until each piece of paper has several ideas. Conclude with steps 6 and 7.

6. Once finished, collect the cards and ask for help taping them to the wall around the topic and its picture.

7. Have the group come to the wall to review the ideas and draw stars next to the ones they find most compelling. Discuss.

Optional activity: Create an idea gallery in the room using flip-chart pads and stands. Ask players to write as many ideas on the sheet as they can and then wander around the room and add ideas to the other sheets. Continue this process until each sheet has a good number of ideas.

Strategy
In a typical group setting, extroverts tend to dominate the verbal contributions. And while their contributions are certainly important, it can be difficult to hear from quieter players who also have something valuable to offer. Let the players know that this play is intentionally silent. It affords the quiet people the opportunity to generate ideas without having to verbalize to the whole group, and it gives you certainty that you’ll hear from every player in the room.

Brainwriting also allows ideas to emerge before being critiqued and creates a space for them to be co-created, with multiple owners, and therefore a greater chance of follow-through.

The Brainwriting game is based on the same-named activity in Michael Michalko’s Thinkertoys. Horst Geschke and associates at the Batelle Institute in Frankfurt, Germany, developed a variety of these creative-thinking techniques referred to as “brainwriting.”