Many of the games in this book are about seeing the bigger picture or relating a problem to its context. The 5 Whys game mirrors that motive to move beyond the surface of a problem and discover the root cause, because problems are tackled more sustainably when they’re addressed at the source.

1. Prior to the meeting, establish a problem your team needs to evaluate. Write the problem in an area visible to all the group members, and if you’d like, draw something that represents it.

2. Distribute sticky notes to each player and ask them to number five of them 1 through 5.

3. Ask the players to review the problem statement and ask themselves WHY it’s a problem. Then ask them to write their first response on sticky note 1.

6. Repeat this process in numerical order until every numbered sticky note has a response written on it.

7. Below the problem statement, write the word “Why?” five times in a column and draw lines to create columns for each player’s set of notes. Ask the players to approach the wall and post their responses, starting with 1 at the top and ending with 5 on the bottom.

8. Review the “Why” columns with the group and note commonalities and differences. 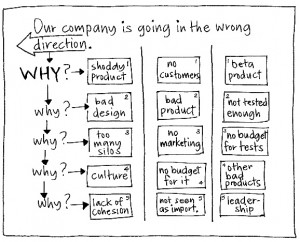 Rewrite the problem statement on a sheet of flip-chart paper. Then give a volunteer five clean sticky notes to write on, and work with the group to build consensus on which of the five “Whys” in the columns offer the most meaningful insight into the problem. Ask the volunteer to rewrite the “Whys”—one per sticky note—as the group agrees on them.  Once they’re all written, tape the five index cards into a final column under the problem statement. If you have time, move into a discussion around “what’s next.” 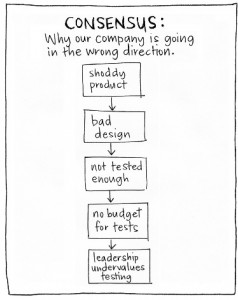 This game is about reading more between the lines—about understanding the root cause of a problem so that people can get the greatest leverage out of solving it. When leading this game, encourage the players to be honest. This is the single most important strategy.

If the players avoid the issues, the game doesn’t yield good information. And in a worstcase scenario, you could have people actually addressing the wrong problems. So, as the meeting leader, be aware of the dynamics between the players and foster open conversation around the difficult question of “why”.

Another important practice is to ask the players to write the first thing that comes to mind each time they ask “Why?”. If they jump immediately to the perceived root of the problem, they may miss the opportunity to see the stages, which are valuable to know for problem solving at different levels.

Finally, many problems require more or less interrogation to get to the root. Ask “Why?” until you feel the group is really getting somewhere. Five Whys is a healthy place to start, but don’t interpret it as a fixed number. Build longer WHY columns if necessary, and keep going until you get the players to meaningful insights.

The 5 Whys game is based on a game by Sakichi Toyoda.