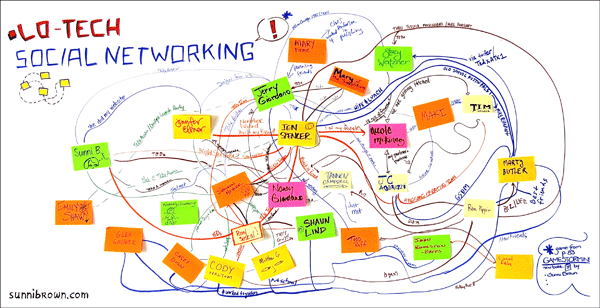 As many of you know, TEDx events have sprung up all over the world. Planning the bigger events takes a lot of time and effort from volunteers who are serious about “ideas worth spreading.” I’m one of those volunteers, having been on the production team for TEDx Austin since its inception. The team was very supportive of our book, Gamestorming, when it was released and we used the next group meeting as an opportunity to demonstrate the value of the visual-thinking activities within. What you see above is an artifact from a recent meeting with some of the best design, marketing and UX firms in Austin. It was a creative brainstorm designed to put the “hive mind” together to see how we can make the 2011 event better and bolder than last year’s (which was very well done, in large part to Nancy Giordano‘s solid mind and infectious enthusiasm). I’d love to be able to show the other visual artifacts from the meeting, alas, that content is intended to be a surprise for the audience.

Some tips for running the Lo Tech Social Network game (on p. 105 of the book): This game is an opener and it really contributes to warming up groups that otherwise may be slow to wake up or timid about contributing, particularly if they’re in a group of their professional peers. (Note: If the people are strangers who have never heard of each other, this game won’t work. At least 1/2 of the participants need to have some knowledge of the others.) Position your white space by a food-and-drink area so the participants can loiter and make connections while they (sometimes awkwardly) stand around before the meeting begins. You can have written instructions on a flip chart next to the space they’re playing in, but it’s also good to have a visual example already in the white space (at least two sticky notes connected by a line that says how the people are connected) and you’ll find that people deduce what to do. And of course you can have a facilitator placed near the area to give people the rules of the game and supply them with markers and sticky notes. Lo Tech Social Network gets fun fast and it alleviates the desire to run the old “My-name-is _______ and-one-thing-people-don’t-know-about-me-is _______” snoozer. This is a faster way to accomplish the same goal and to actually show how small the world can be. And if you want to make the game less formal, start off the visual example by writing a comment like, “we have the same taste in women” or “we went to the same nudist colony.” If you’ve got a tight-knit group already, let them be goofy. It makes it a funnier experience.