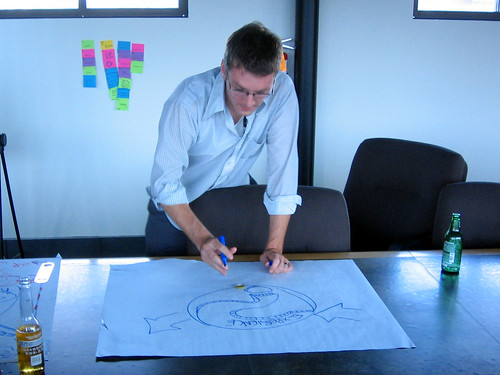 Object of Play
This game asks players to envision and describe an ideal future in sequence using words and pictures. Storyboarding as a technique is so versatile that it can be used to show any topic, not just an ideal future. But it is particularly powerful as a visioning exercise since it allows players to imagine and create possibilities. The players tell a story with a happy ending, planting tiny seeds for a different future. You can also use storyboarding to let employees describe their experience on a project, to show approaches to solving a problem, or to orient new employees on policies and procedures—its uses are limited only by the imagination.

How to Play
Before the meeting, determine the topic around which the players will craft their “ideal” story. Once the meeting starts, divide the group into pairs or groups of three or four, depending on the size of the group. Provide markers, pads of flip-chart paper, and stands.

1. Tell the players that the purpose of this game is to tell the other players a feel-good story. The topic of the story is “The Ideal Future for [blank]”—for a team, a product, the company, whatever you decided beforehand. The players’ assignment is to visually describe the topic and narrate it to the group.

2. After the groups are established, give them 20–25 minutes to (1) agree on an ideal state, (2) determine what steps they would take to get there, and (3) draw each step as a sequence of large images or scenes, one per sheet of flip-chart paper.

3. Give the players a two-minute time warning, and once the time is up, bring them back together. Ask for volunteers to tell the story first.

4. After all the groups have presented, ask them what’s inspiring in what they heard. Summarize any recurring themes and ask for observations, insights, and “aha’s” about the stories. 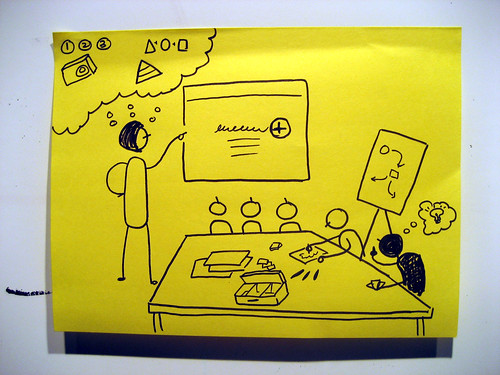 Alternative: Have individuals draw their storyboard images on large stickies.

Strategy
As the leader of this game, be sensitive to the fact that many of the meeting participants will freak when you tell them that large-scale drawing is involved. Reassure them that the story is the point of the exercise and that the images play a supporting role. They can use words as captions to clarify the images and they can also select the “artist” within their group so that not everyone has to put marker to paper. (But it’s more fun for those who do.) Finally, remind them that they aren’t allotted sufficient time to create a da Vinci anyway, so stick figures work perfectly well.

For the presentation format, there are various options. Breakout groups can post each sheet of flip-chart paper in a row around the room and walk along the row as they tell the story. They can also leave the flip-chart pad intact and flip the pages over the stand as they narrate. They could choose to hang the sheets in rows and cover them, using one group member to act as a “Vanna White” and create a series of voilà moments. Tell them to have fun with it—they won’t be graded on their stories (although you could make it a contest if it’s that kind of crowd). The process of creating and sharing the stories is what matters.

Walt Disney is credited for this activity. His need to animate Steamboat Willie in 1928 led to the process of storyboarding—a story told in sequence on a wall covered with a special kind of board. He found it to be an effective way to track progress and improve a story.