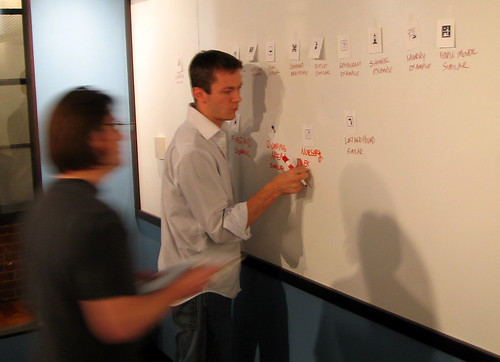 Spectrum mapping is designed to reveal the diversity of perspectives and options around any given topic and to organize them into a meaningful spectrum. This game gives players an opportunity to express their views without having to assert them vocally or even take ownership of them in front of the group. It’s valuable because it unearths information that plays a role in attitudes and behaviors that otherwise may not be visible.

1. Before the game begins, brainstorm topics around which you want insight from the group. Write each topic on a sticky note.

2. Introduce Spectrum Mapping by stating that the purpose of the game is to illuminate the team’s range of perspectives and to organize those perspectives into a continuum so that everyone gets a view of it.

3. Post the topic sticky notes in a column in the approximate middle of a space on the wall visible to the players. Ask everyone to silently generate a point-of-view preference option around that topic and write it on a sticky note. They are welcome to offer more than one.

4. Ask the players to come to the wall and post their sticky notes in a horizontal line on either side of the topic. Reassure them that the relationships between the sticky notes aren’t yet of interest. The visual may look like the following figure.

5. Once the sticky notes are posted, work with the group to sort them into a horizontal range of ideas. Sticky notes that express similar perspectives or options should go next to each other. Sticky notes that seem to be outliers should stand alone; they may sometimes end up defining the limits of the range.

6. Continue sorting until the group agrees that the sticky notes are in their appropriate places on the horizontal line.

7. Repeat this process if you have more topics to evaluate.

Once the spectrum for each topic has been laid along the horizon, ask for observations and insights on the lay of the land. Discuss the findings with the group and ask if any perspective or option has been excluded. If so, add it and re-sort as necessary. 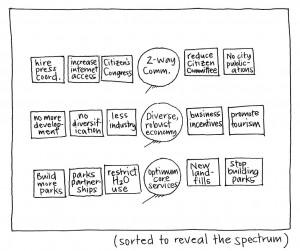 Not only does spectrum mapping reveal individual ideas around important topics, but it also tells you how many members of your group have certain types of views and where their endpoints lie. After spectrum mapping, the players are likely to discern a more holistic view of where they stand. In other words, spectrum mapping indicates whether the group tends to lean a certain way—perhaps it’s fiscally conservative, oriented toward growth, or reticent about change. Either way, as a team leader, it’s good to be aware of the group’s natural inclination and openly acknowledge it to enhance future team building, problem solving, and planning.

Assure the players that they’re free to write up honest perspectives and preferences around a topic even if those preferences may be considered outlandish by the other players. Tell them that outlier ideas still make it onto the continuum. This play is about mapping and displaying the spectrum, not evaluating ideas for validity, innovation, or popularity. This game has the effect of letting groups see if their behavior skews too far to one side or whether they’re taking a reasonable approach when a radical one may be better.

The source for the Spectrum Mapping game is unknown.