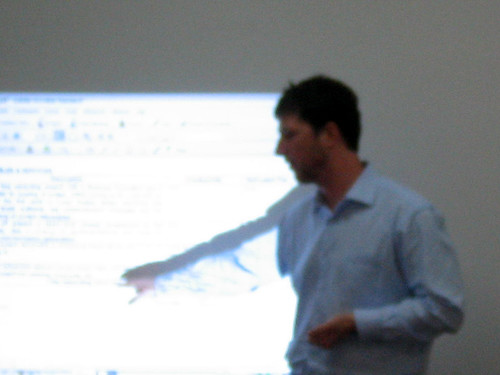 These fast, structured talks enable people to share ideas quickly and with a minimum of distraction. In addition, it puts the pressure on the person conveying the information to do so in a concise and compelling fashion.

Any size, from a small working group to an auditorium full of people.

Can go anywhere from one to four hours. Total time varies widely based on the number of presenters.

Pecha Kucha is based on a simple idea: that by limiting the number of slides in a presentation, and limiting the amount of time a presenter can spend on each slide, presentations will convey information concisely and at a rapid pace. The rule of Pecha Kucha is 20 x 20: Presenters are allowed 20 slides, and they can spend 20 seconds per slide.  Images are forwarded automatically—they are not under the control of the speaker.  Another variation, Ignite, has a similarly structured pace.

By tradition, Pecha Kucha and Ignite nights are fun, informal evening events, but the concept will work just as well within any work group or team.

The goal of these talks is to constrain presenters while keeping things fun. Often drinks and snacks are involved, and the right emcee can make a big difference in the quality of the experience. If you have a lot of people, spend some time on details, like picking a venue with good acoustic qualities and arranging for good sound and video equipment.

Make sure not to give presenters control of their laptops!

Pecha Kucha (pronounced peh-CHA kuh-CHA—Japanese for “chit chat”) began as an event in Tokyo where designers could share their ideas. The Pecha Kucha presentation format was devised by Astrid Klein and Mark Dytham of Klein Dytham architecture. The first Pecha Kucha Night was held in Tokyo in their gallery, lounge, bar, club, and creative kitchen SuperDeluxe in February 2003. Since then, Pecha Kucha has inspired similar events with some minor variations, including Talk20 (short presentations of 20 slides each) and Ignite (short presentations of 20 slides each, 15 seconds per slide).