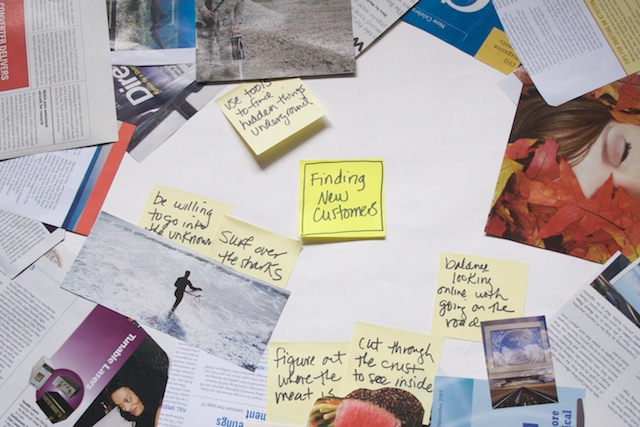 Object of Play: To generate new ideas about a topic you feel stuck on.

Images have the ability to spark insights and to create new associations and possible connections. Encourage people to allow themselves to free-associate and see potential new ideas. In this type of play, you are asking people to move back and forth between using their visual and verbal skills. When done in rapid succession, as in this game, this switching offers the possibility for more ideas and approaches to emerge.

When leading the game, some participants may need to be reassured that the goal is not to come up with a design or specific answer. Keeping Image-ination time frames short reduces this ability and requires people to allow associations to emerge from a less-considered space. After all, if what everyone was already thinking could readily solve the problem, the group would not feel stuck. The idea is to move beyond the stories people always tell and to surface something new and different.

You may hear that people can’t find the picture they want to describe their ideas. That’s actually a good sign! That “problem” actually means the participants have the creative opportunity to find another kind of association.

Imagine-ation is adapted from the Visual Icebreaker Kit, one of several image-based games and tools from VisualsSpeak. It is © 2010 VisualsSpeak LLC.