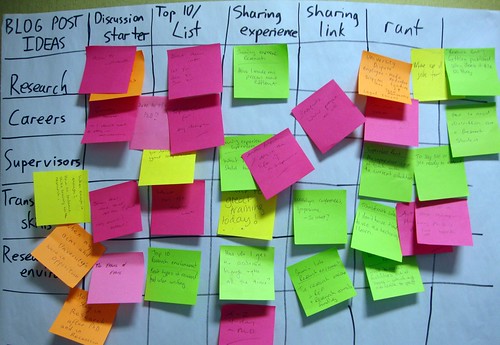 In this simple game, participants use a matrix to generate new ideas or approaches to a solution. The game gets its name from three heuristics—or rules of thumb of idea generation:

• A new idea can be generated from remixing the attributes of an existing idea.

• A new idea is best understood by describing its two essential attributes.

• The more different or surprising the combination of the two attributes, the more compelling the idea.

To set up the game, participants decide on two categories of attributes that will define their matrix. For example, a toy manufacturer might look at its product line by type (vehicles, figures and dolls, puzzles, and instruments) and by type of play (racing, simulation, construction). Participants use these lists to populate a matrix, creating a grid of new possible combinations.

In playing the game, participants look across the cells for unusual or surprising combinations.  These become the seeds of new ideas.

Some combinations that at first seem absurd are worth examining more closely: a toy that combines puzzle pieces with a racing element might seem counterintuitive, but there are classic games built around that principle. After looking across the matrix for such combinations, a group may then develop fast prototypes or sketches that explore the possibilities. Consider that GI-Joe came to life conceptually as a “doll for boys.”

The technique used in this game was documented by Edward Tauber in his 1972 paper, “HIT: Heuristic Ideation Technique, A Systematic Procedure for New Product Search.”