Often during meetings we bring together stakeholders who aren’t familiar with each other’s perspectives or aren’t accustomed to listening to each other without offering an immediate response. In some cases, stakeholders may even be meeting for the first time.  In scenarios like these, it’s not surprising that it can be difficult for people to engage in a rich and meaningful conversation. The Fishbowl game is an effective way to activate attention—to prime our natural listening and observing skills so that a more substantive conversation can take place.

1. Before the meeting, think of a topic that could be served by a group discussion and write down questions associated with it.

2. Find a room with a good amount of open space and clear out anything other than chairs.

3. Create a handout similar to the following: 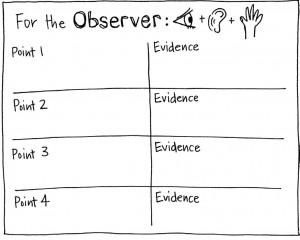 5. Introduce the game and assign “observer” or “player” status to each person. Give everyone a pen and a handout (but mention that the handout is used only in the observer role). Ask the participants to sit in the circle relative to their assigned role.

6. Announce the topic of the game and ask the players to take 15 minutes to have a discussion around it. Use the questions you generated before the meeting to start the conversation and keep it moving. Make sure the players know that their responsibility is simply to converse in the circle. Make sure the observers know that their role is to pay close attention and to write on the handouts all discussion points and evidence that come out of the conversation.

7. When 15 minutes are up, ask the group to switch seats and switch roles. Then start another 15-minute discussion on the same topic or a different one.

8. After both conversations have completed, ask for volunteers to share the information they gathered and ask them to describe their experiences on the inner versus outer circle.

People are well versed in having conversations; what most of us aren’t used to is listening, observing, and being accountable for our observations. The Fishbowl game, therefore, is about engaging skills that in many of us have become rusty. So, despite the fact that it may look as though the action happens in the players’ conversation, the action in this game happens in the outer circle, with the observers. As the group leader, be clear with the group that this is a listening and observing exercise. If there were a point system (and there is decidedly not), points would be awarded to those who most accurately logged the conversation that took place—not to those who made the most comments in the discussion. Talk to the group about their experience of being silent and paying attention. What was difficult about it? What was easy? How did it affect their perception of the topic and the other players? Use the Fishbowl exercise as a segue to a heightened give-and-take between stakeholders.

The Fishbowl game is based on ideas from the Facilitator’s Guide to Participatory Decision-Making, by Sam Kaner et al.

Categories: Games for opening, Games for team-building and alignment