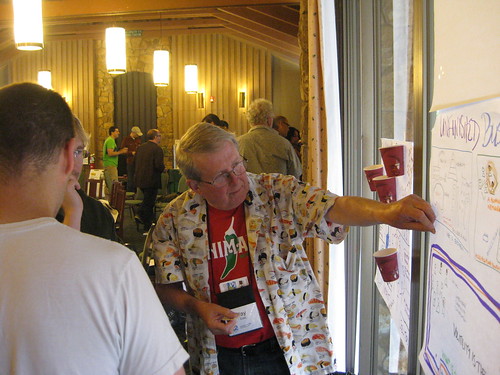 Object of Play
Cover Story is a game about pure imagination. The purpose is to think expansively around an ideal future state for the organization; it’s an exercise in visioning. The object of the game is to suspend all disbelief and envision a future state that is so stellar that it landed your organization on the cover of a well-known magazine. The players must pretend as though this future has already taken place and has been reported by the mainstream media. This game is worth playing because it not only encourages people to “think big,” but also actually plants the seeds for a future that perhaps wasn’t possible before the game was played.

Number of Players: Any

Duration of Play: Depends on the number of players, but a maximum of 90 minutes 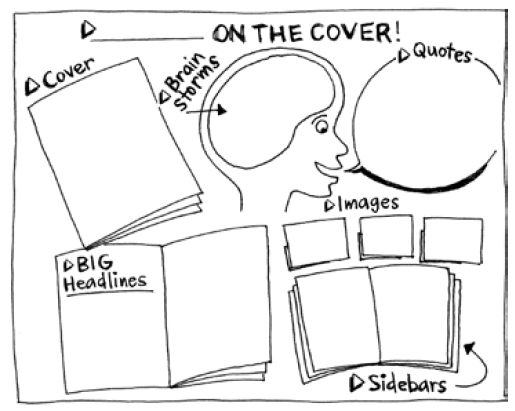 How to Play
1. Before the meeting, draw out large-scale templates that include the categories shown on the following image. Your template doesn’t need to look exactly like this one; you can be creative with the central image and the layout. Just be sure to keep the categories intact. The number of templates you create depends on the size of the group. At the most, allow four to six people to work on one template together.

2. Explain the object of the game to the players and define each category on the template:
• “Cover” tells the BIG story of their success.
• “Headlines” convey the substance of the cover story.
• “Sidebars” reveal interesting facets of the cover story.
• “Quotes” can be from anyone as long as they’re related to the story.
• “Brainstorm” is for documenting initial ideas for the cover story.
• “Images” are for supporting the content with illustrations.

3. Break the players into groups of four to six and make sure there are markers and one template for each group. Tell the players that to populate the template they can either select a scribe or write and draw on it together.

4. Ask the players to imagine the best-case scenario for their company and to take that scenario one step further. Request that they spend five quiet minutes imagining their own stories before they work together to agree on one. Give the groups 30–45 minutes to generate this “story of the year” and represent it on their template.

5. Reconvene the breakout groups and ask for volunteers to present their visions first. Give each group 5–10 minutes to share what they imagined was written in the story and the supporting elements.

6. Note any common vision themes and areas of agreement. Ask for observations, insights, and concerns about the future state.

Optional activity: Ask two players to role-play an interview based on the content from their “On the Cover” template, as though the magazine sent a reporter to interview an important character in the story. 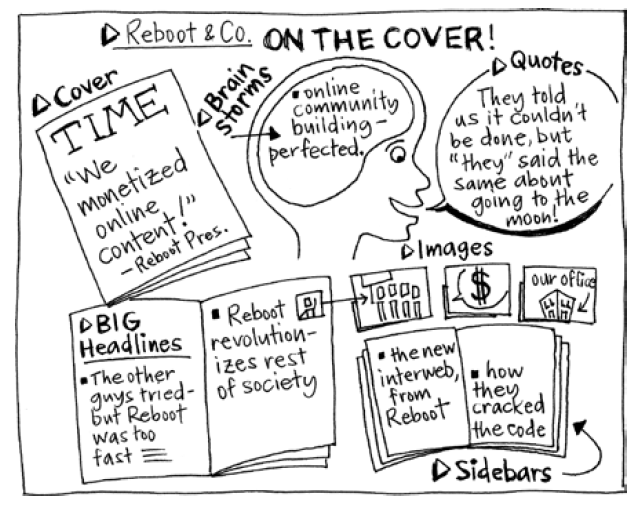 Strategy
This game is about the wildest dream for the organization—that has already happened! So, when you set up this game as the meeting leader, speak about their “successes” with enthusiasm and in the past tense. Encourage the players to use the past tense in their brainstorming and story creation. And don’t let the group go into analysis mode. This game is not about logic, pragmatism, or parameters. Cover Story is an open-ended, creative-thinking exercise, so tell the players to be wary of any “reality checks” from other players. And as the small groups present their visions to the large group, note and discuss any common themes that arise. These themes—however fantastical—are telling, because commonalities reveal shared hopes and also plant seeds for real possibilities. If this play is part of a longer group process, post these visions around the room so that they serve as reference points for continued ideas and inspiration.

This game is based on The Grove Consultants International’s Leaders Guide to Accompany the Cover Story Vision Graphic Guide® ©1996–2010 The Grove. 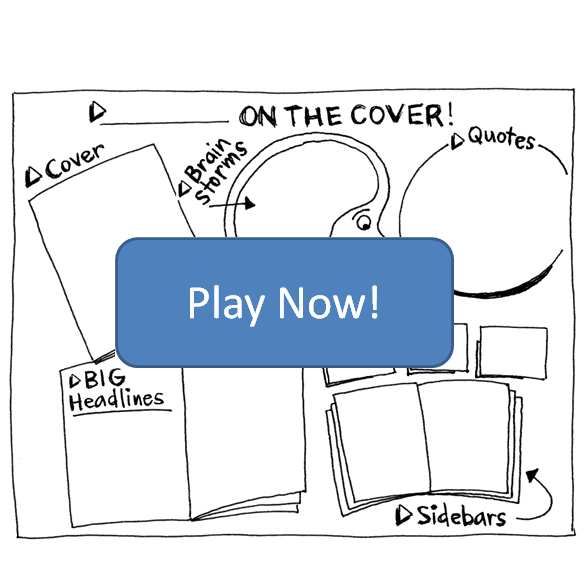 Here is another image of the Cover Story Game. But this one is special – clicking on this image will start an “instant play” game at www.innovationgames.com. In this game, there will be a set of light bulb icons that you can drag on your online Cover Story to capture your big ideas. We’ve organized this game so that the regions will capture where you’ve placed each of your awesome ideas.

Categories: Games for design, Games for fresh thinking and ideas, Games for opening, Games for team-building and alignment, Games for vision and strategy meetings