There is a time to go deep. Just as in science, breaking large structures into their base components is fundamental to knowledge work. It is how we create understanding and formulate new ideas.

This exercise starts with a single item and ends with a layer-by-layer analysis of its components. It is useful for unpacking large but poorly understood structures. Although the applications are numerous, some structures that are well suited for atomization include:

• A supply or demand chain

• A group’s culture or other “intangible”

By breaking the larger system into its components, the group will have an advantage in problem solving or brainstorming. Because they are more discreet and tangible, the smaller components are more easily handled and better understood. Likewise, the overall map that is created will help serve as an explanation of the overall system. 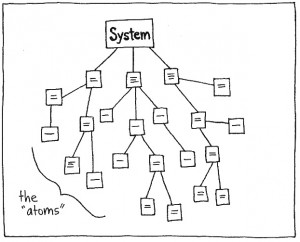 At some point, usually four to five levels deep, there is a natural turning point. Instead of becoming more diverse, the items start to become more fundamental. This is the atomic level, and where some of the most interesting results are found. In exploring a group’s culture, this is where hidden attitudes and behaviors unique to the group may be discovered. In atomizing a service offering or product, this is where elementary characteristics and differentiation points may live.

The Atomize game is credited to James Macanufo.