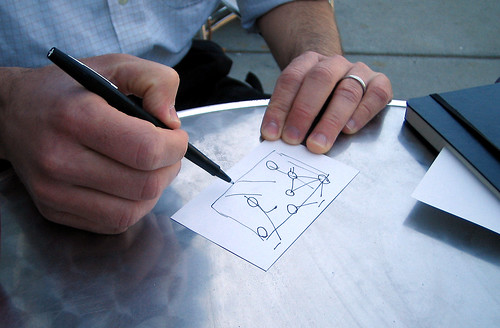 Object of Play
This format for brainstorming compresses the essentials of an ideation session into one short format. The numbers 3-12-3 refer to the amount of time in minutes given to each of three activities: 3 minutes for generating a pool of observations, 12 for combining those observations into rough concepts, and 3 again for presenting the concepts back to a group.

Essential to this format is strict time keeping. The “ticking clock” forces spontaneous, quick-fire decisions and doesn’t allow for overthinking. With this in mind, a group that is typically heavily measured in its thought process will benefit the most from this exercise but will also be the hardest to engage. Given its short duration (30 minutes total for 10 participants), 3-12-3 Brainstorming can be used as an energizer before diving into a longer exercise or as a standalone, zero-prep activity. It works equally well in generating new ideas as improvements to existing ones.

Number of Players
This is a fast exercise that gets slower as more participants are added. With up to 10 participants working as partners, the speed of the exercise makes it an energy builder. Working beyond 10 may require creating groups of three instead of pairs to keep from getting slowed down.

Duration of Play: 21–30 minutes, depending on number of participants

How to Play
You will need a topic on which to brainstorm ideas, boiled down to two words. This could be an existing problem, such as “energy efficiency,” or it could be focused on creating something new, such as “tomorrow’s television.” Although the two words could be presented as a full challenge question, such as “How
will tomorrow’s television work?” it is best to avoid doing this right away. By focusing on two words that signify the topic, you will aim to evoke thinking about its defining aspects first, before moving into new concepts or proposing solutions.

To set up the game, distribute a stack of index cards and markers to all the participants. Everyone should have a fair number of cards available. The game should begin immediately after the rules have been explained.

Strategy
Speed is key. Many traditional brainstorming techniques can be slowed down or fouled entirely when time is not of the essence, despite the best intentions of participants. Additionally, speed helps prove the value of what can be accomplished in short bursts—often the important aspects of good ideas can be captured very quickly and do not require laborious discussion before first coming to light.

After presenting concepts back to the group, teams may do a number of things. They may dig deeper on an individual concept or try to integrate the ideas into each other. They may vote or rank the concepts to decide on which to spend more time developing. Often, concepts coming out of this exercise are more memorable to the participants, who are bonded in the time-driven stress of creating together.

The 3-12-3 Brainstorm game is credited to James Macanufo.